Obverse: Crude crowned bust right, runic epa in front, this preceded by an additional T; TAT behind. Reverse: Beaded ‘standard’ to centre this enclosing the letters TOT II, cross above, beaded triangle below, ITATI to either side, all within a beaded border.

A sharp strike in good silver, with a dark brown ‘field find’ tone. No faults, even under high magnification.   VF and better.

Metcalf breaks Series R down into no less than 12 groups spanning perhaps half a century of production. Group 2 coins are characterised by the ‘T’ in front of the runic inscription, and the letters TAT or ITAT behind the bust. They belong to the early part of the series and are of high silver content (88 – 96%) and weight (1.15 – 1.2g). Series R coins are considered East Anglian in origin, and late groups in the series are rarely found outside of East Anglia. Early coins are more widely distributed however and there is a possibility R1 and R2 may have originated in Kent. See D. M. Metcalf, ‘Thrymsas and Sceattas in the Ashmolean Museum Oxford’, Vol. 3., p. 508. 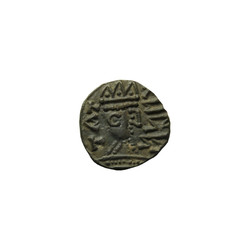 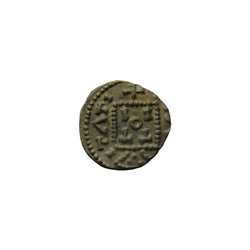