The retrograde legends and light weight suggest this coin may have been struck by a Viking moneyer in Danelaw Northumbria. The Norwegian Viking Eric Bloodaxe took York in 947, but lost it to Eadred shortly afterwards. The town was again taken by Vikings when the Hibero-Norse Anlaf Curan conquered the area in 949. In turn Anlaf lost York to Eric Bloodaxe in 952, Eric becoming the last Viking ruler of Northumbria. The coin appears to be a lovely example of historic propaganda, the legends are beautifully cut yet Eadred’s name has been neatly reversed and the letter ‘A’ cut as a Thor’s hammer symbol. This mark also appears on the coin reverse. The reverse legend is probably an inaccurate retrograde rendition of ‘REGDER ES MO’ (coins of the moneyer Hreitharr, see EMC 1002.0656 and EMC 1009.0371), the ‘G’ being rendered as a second ‘E’, and the ‘D’ being rendered as a ‘P’. 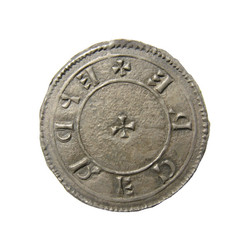 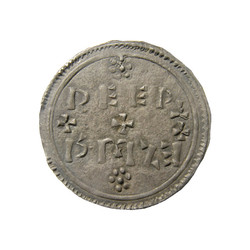