A lovely coin, of great metal, a full flan, and with a pleasant silver/grey tone. Some weakness to the reverse but ‘as struck’. The obverse has an interesting array of privy marks. The reverse die matches EMC: 1068.0738 (SCBI: 68/738, Lyon Collection). nEF.

Part of the Tetney hoard, see John Walker, ‘A Hoard of Anglo Saxon Coins from Tetney Lincolnshire’, Numismatic Chronicle, Sixth Series, Vol 5, pp. 81-95. This coin: no. 133, 20.3 grains. The hoard was discovered in May 1945 by ploughman Morris Walter Houlden. The coins were contained in a hard chalk receptacle which broke in two when hit by the plough, revealing 420 coins, and two silver clips. The bulk of the coins were of Eadred (45), Eadwig (77) and Eadgar (292). The British Museum cleaned the corroded coins, retained several, and returned the remainder to the finder. Many were subsequently sold to the London dealer A. H. Baldwin. 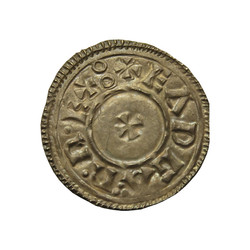 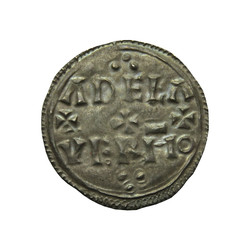