There is some debate as to whether double name signatures are common-name differentiators or whether they indicate an alliance of moneyers. Hildebrand believed the former in part because double names are generally associated with major mints. Other researchers favor the alliance viewpoint as many early 10th C. double name moneyer examples exist where both names are also found individually on other coins. Neither stance is supported by the name Aelfwi Swencel; derivatives of the second name appear on coins in conjunction with two first names – Aelfwi and Leofstan, but Swencel is never found alone on coins, and if it is a name it appears to be a very unusual one. 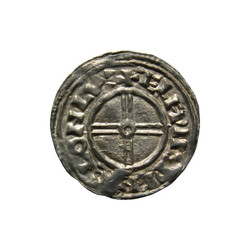