A nice example of a rare and fascinating coin. Cabinet toning, with a little ‘petrol’ iridescence. Of good fabric, and without any significant flaws (minor ancient scratches which do not detract). Very fine.

This dumpy little sceatta stands out as an oddity when considered either as the forerunner of the Northumbrian coinage of the 8th C., or as part of the main series of primary and continental sceattas. It has been attributed with a degree of certainty to Aldfrith of Northumbria. His reign marked the start of Northumbria’s ‘Golden Age’, the kingdom becoming a spiritual, cultural and artistic powerhouse during the 8th C. The Lindisfarne, Durham and Echternach gospels are all thought to have been produced during this period. It is thus of little surprise that (arguably) the first coins manufactured in Britain north of the Humber should bear his name. 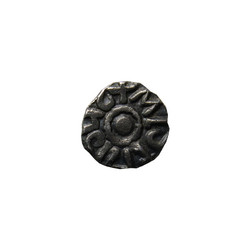 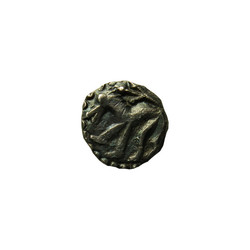